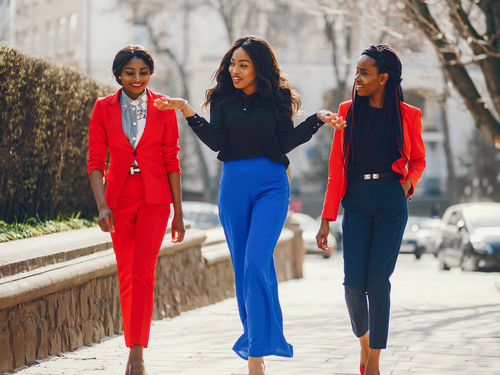 Event Description:
Join us for Real Talk with Black Women (Virtual) Event!
Gaining a Seat at the table, Overcoming Challenges, and Maneuvering through Microaggressions.

Manager of Business and Workforce Diversity

Tammi Davis is the Manager of Business and Workforce Diversity for the Barack Obama Foundation in Chicago and oversees the diversity efforts in building the Obama Presidential Center. With over 20plus years of experience of working in the public, private and non-profit industry sectors, Tammi brings a panoramic perspective in developing policies, programs and initiatives that engage under-represented and under-served communities in economic development opportunities. She serves on several local, state and regional boards and is the recipient of numerous awards. Tammi holds a Bachelor’s Degree from Jackson State University and a Master’s Degree from Indiana University.

Theresa is a seasoned change agent.  She has led many teams during crucial transformations.  Her ability to mobilize and motivate teams is a gift that she strengthened by serving in the U.S. Air Force as a Sergeant in the 965th Airborne Warning and Control Squadron.

She transitioned to the corporate community and harnessed the principles of military life into becoming a successful leader in Corporate America.  For the past 25 years, she has honed her leadership and love for diversity at major companies such as GTech, AMEC, Google, Chicago Tribune, and Morton Salt.  She is currently a Senior Manager at Medline Industries, where she oversees the Customer Supply Chain for the Retail Division.

Her leadership and community service have been acknowledged and awarded many times. She was most recently the recipient of the Crescent Moon Award for military and community service from the men of Phi Beta Sigma at their annual Carnation Ball. Theresa is also a faithful servant at the Apostolic Church of God in Chicago as an Ordained minister. She is truly a motivational leader that inspires everyone to believe they belong and have value.

Trinnette began her career as a teacher followed a successful consultant in educational leadership.

She left corporate America in 2011 and embarked on building her food empire, “Trindy Gourmet”.

Trinnette is the recipient of several awards including the Black Chamber of Palm Beach County Small Business of The Year Award (2016), Legacy Magazine Top 50 Influential Women in Business and Industry Professionals Award (2019), Delta Sigma Theta Women of Excellence Business Leadership Award (2019), and others.

She has also been featured in several publications and broadcasts and multiple segments on MSNBC.

Ava Parker leads the county’s largest higher education institution, Palm Beach State College. Parker is a member of the national Board of Directors of the American Association of Community Colleges and the Advisory Board of the Community College Research Center. She serves on the board of directors of the Business Development Board, the Economic Council of Palm Beach County, Purpose Built Communities/Northend RISE, Florida Council of 100, Orchid Island Trust Company and Professional Bank. Parker received her bachelor’s degree and juris doctor from the University of Florida. She is married to former State Representative Joe Gibbons and is mother to twins Parker and Bailey.